‘Naither the shells nor the shore belang tae us, lass.
But that’s aw the mair raison tae tak guid care o them.’

Shellycoat was originally written for BBC Scotland, as part of their Stories in Scots series, and you can hear it being read on the BBC Sounds website here.

*NEW* See the Shellycoat Resources page for worksheets and other ideas for teaching Scots with Shellycoat.

I know many people have enjoyed listening to it, and some have asked to read the story, so I am making the original written version available exclusively on my website. Please click here to download the text. 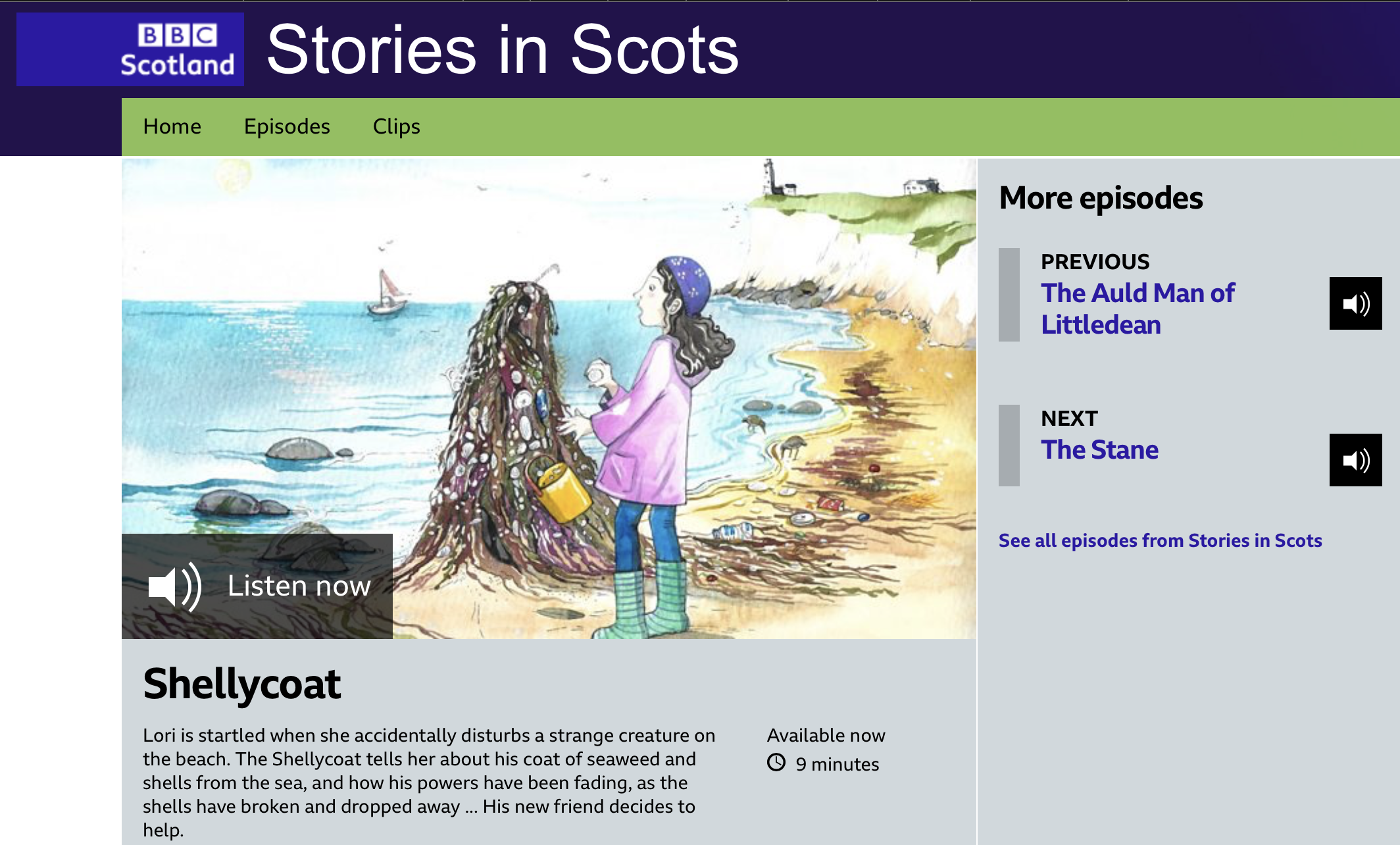 There are local legends of Shellycoats from all over Scotland. Some are mischievous, and some are more shy — but they all wear a bonnie shell goon that makes an awfu clitter-clatter when they move!

Shellycoat, a spirit, who resides in the waters, and has given his name to many a rock and stone upon the Scottish coast, belongs also to the class of bogles. When he appeared, he seemed to be decked with marine productions, and, in particular with shells, whose clattering announced his approach.
— Walter Scott, Minstrelsy of the Scottish Border

My Shellycoat is an ancient craitur, born in a glacier thoosands o years syne. But when he meets Lori, a young shell-collector, he is not as braw and bonnie as he once was. The shells on his goon are fading and breaking, and his life spirit is dwinin awa. Forby, he misses the shore birds who used to bring him shells to mend his goon. Can Lori help to restore the life spirit of the Shellycoat before it is too late? And will befriending a Shellycoat forever change the way she thinks about the shore and the natural world around her?

Lori saw that his goon wis a patchwark o bleached and brukken shards. Even the bonnie blue shell had a pale ooter rim. It minded her o pictures she’d seen o deid coral reefs. But that wis on the tither side o the warld. She hadna thocht o it happenin here.

Although I imagined the story taking place near where I live in South Queensferry, it could be set near any coastal river – wherever a Shellycoat might traditionally be found. The story includes lots of Scots words for shells like wulks and spoots, and shore birds like reidshanks and sea-pyots, whose distinctive wheepling call can be heard in many coastal areas of Scotland.